RCN to the Rescue ! Penicillin & Meningitis : the NOVA SCOTIA connection 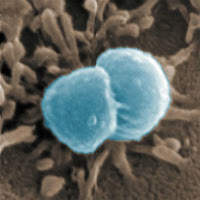 If your family doctor just thinks your child might have meningitis, she or he is likely to break all manner of speed laws getting to your house - but once there, might surprise you by pulling out the oldest - not the newest - medicine in their little black bag to save your child's life.
The news this week that research scientist Richard Din died of meningitis contracted while working in a San Francisco government lab highlights just how rapidly fatal (mere hours) this disease can be.
Conversely, it still remains a disease which even the greenest of interns knows requires an immediate big needle of good old penicillin "G", (the original antibiotic, now in use clinically for almost 75 years).
It  should always be given, they are constantly reminded, on the merest suspicion of meningitis, even before any tests are back to confirm it.

Norma Salah,77, who died this week from injuries incurred when she was attacked in her home last month, was the very first Nova Scotian publicly identified as having her life saved by penicillin --- 68 years ago,  in July 1944.
And yes - she too had meningitis.
A week earlier ( July 12 1944) , Ottawa had announced that extremely small amounts of penicillin would soon be made available to the bigger civilian hospitals for select life-threatening disease cases.
But none had arrived at Halifax's Children Hospital and probably none at any of the other (adult) civilian Halifax hospitals either.
Norma, then the 9 year old daughter of Mr and Mrs John Salah of 51 Agricola Street in Halifax, had severe meningitis and her doctors were despairing for her survival, unless she got a big fat needle of penicillin "G".
And STAT !  (As they always say on the TV medical shows.)
The Royal Canadian Navy (RCN) had some emergency-only penicillin in its military hospital in Halifax - and was willing to 'lend' a little to the civilians,  if Ottawa said okay.

The head of the RCN was Navy Minister Angus L MacDonald, in peacetime premier of Nova Scotia and an MLA for a Halifax riding.
His Department - naturally - was happy to say yes and Norma's life was saved with hours to spare.
That there was penicillin at all for Norma and for the Canadian Navy was mostly due to the persistence of a Nova Scotia born, New York City based doctor and to the meningitis death, years earlier, of Mary Louise Smith of Brooklyn New York.

Dr Martin Henry Dawson, born in Truro in 1896, was the holder of a Military Cross for bravery in wartime  ---- and was equally brave in peacetime as well.
Though dying himself of a painful and incurable disease, he had fought the American government and Big Pharma for years to just give penicillin grown by fungus "a chance", a chance to save lives.
But the wise money, as always - even in wartime , was for holding off until patentable/profitable man-made penicillin could be synthesized. (It has never been synthesized commercially) .
Dawson got lucky when his own success curing incurable diseases with penicillin finally got to a certain Mr and Mrs Smith, the parents of a little girl called Mary Louise.
She had died years earlier of meningitis. Dawson made it very clear to the husband in this couple, 'yes many diseases could only be cured by large amounts of scarce penicillin but that meningitis was decidedly not one of them'.
With meningitis, Time not Amount, is paramount.
The most common and deadliest form of the disease is caused by the meningitis bacteria itself and fortunately they practically fell over dead if someone so much as merely mentioned penicillin in the next room over.

It was probably the gentle but persistent nagging of Mrs Mae Smith on her hard-nosed husband John L Smith, that finally moved him off of his traditional commercially-oriented caution and into an eight month period when he climbed onto a wagon and proclaimed to the world for all to hear :"I have seen the light - the light of natural penicillin- and have been as if born again."
John L Smith had the power to make natural penicillin better than anyone else on earth - if he was so moved - because he was the head of a company that was better than anyone else in the world at extracting penicillin-like substances from molds.
Hitherto, his company was a mid-sized company devoted to supplying citric acid from molds to the soda pop industry and was basically unknown to the public.
But when John L turned Pfizer loose on the penicillin problem, well yes, our whole world changed - for ever.
As did the world of Pfizer as well - it's easy to bet you've heard of them !
By the time Norma got sick with meningitis on July 19th 1944, North America was about to be awash in Pfizer-grown penicillin in the long, long pipeline from their Marcy Avenue plant to the frontline family doctor.
Only concern about unforeseen war needs overseas kept governments cautious about releasing too much to the Home Front.
However - thanks to a dying little girl with meningitis in Brooklyn, the Royal Canadian Navy, a Nova Scotia premier, and a Nova Scotia born doctor, Norma's life was saved.
She entered history for all time as the first Nova Scotian to be saved by an antibiotic - her death this week by murder shouldn't change any of that....
blogging @Hope for All Michael Marshall at 5:47:00 PM