Part I : the SBEs


Dr Henry Dawson's (non-publicized) decision to quietly inject a truly tiny amount of his homegrown version of an impure and untested new medicine, into two no-account patients in a near empty hospital, surely qualifies as one of the clearest possible examples of a journalistic non-story.

Particularly when set against the really big news story on that same day, October 16 1940 : America's first ever peacetime draft registration.

But yet the sum of an event's symbolic impact can be far larger than its small physical presence - that historical first ever injection of a life-saving antibiotic still echoes down to us today.


To try and answer why, let us turn to the world of really really bad films.

As a film to be considered for serious review for its artistic merits in the pages of such as the august New York Times, the story of Rambo trying to rescue Vietnam MIAs against resistance from his own government doesn't begin to make the first cut.

Somewhat like the non-newsworthiness of  Dawson's first injections of penicillium slime juice.

It was before the days that such shlock was consigned "straight to video release", so instead Rambo's film seemed destined to be buried out on the screens of small town drive-ins.

Because First Blood Part II (Rambo II) became both a huge international box office success and such a potent cultural symbol it even turned around presidential elections of the most powerful nation on earth, with consequences for the whole world.

All this happened because most of the time even the intellectuals among us find huge events too hard to emotionally grasp and so it takes a tiny but highly individualized representation of that event to make a huge event culturally potent.

All because we allow real people to be complex and contradictory in the way that logical arguments are not so premitted.

Rambo advocated a position on MIA rescue held most strongly by the Right in America but he was a long haired hippie in appearance and was partly native American, things that definitely appealed to the Left in America rather than the Right.

He agreed the Vietnam war was bad (Left) but he was patriotic (Right) so he did as he was ordered to do - and still his corrupt government (Left & Right) betrayed him --- and all the brave MIAs left behind.

Appealing to all bases, emotionally Rambo II really cut through,  once again proving up Noel Coward's claim that "it is amazing how potent cheap (film) music can be."

Dawson instinctively if inchoately sensed all this when he settled on the impossible task of curing incurable SBE with the first batches of his homemade penicillin.

Not into playing medical parlour tricks


This, rather than performing the easy but emotionally effective medical parlour trick of swiftly curing hitherto healthy kids dying of a sudden sharp acute infection.

The newspaper reports upon the 'miracle' cures of the new Sulfa drugs of only a handful of years earlier had all been parlour tricks of this sort.

But most patients in critical condition at hospitals are usually have much older worn out bodies and immune systems and come complete with multiple chronic weaknesses, such that even miracle drugs only save some of them.

Their stories though are universally neglected by the media who prefer the cheap music cures instead.

Not only do the little kiddies' general good health but acute response to acute infections make for highly dramatic before and after pictures, their small body weight and good immune systems means only small amounts of the usually scarce new drug will effect a cure.

the Mount Everest of infectious deaths


But if curing childhood acute infections was really a medical parlour trick, curing the incurable SBE was the very Mount Everest of medical efforts.

In earlier posts, I have rehearsed all the reasons that made it rational for the world's scientific elite to believe that invariably terminal and invariable re-occurring SBE could never be cured for long, all the while consuming enormous amounts of scarce wartime medical resources during that inevitably dying.

They did not see denying penicillin to SBEs as 'medical murder' --- they honestly believed that the SBEs would all die in a few months at most - with or without massive amounts of penicillin - scarce penicillin that could be better parcelled out to dozens of other patients dying from more easily curable and non-re-occurring diseases.

But Dawson (correctly/presciently) noted carefully that the new and untried penicillin had some truly unique attributes, attributes that he believed would let it finally cure SBE and even prevent its re-occurrence.

Emotionally he sensed that SBEs, working class minorities nobodies generally, had something that would make denying them a lifesaving medicine in the middle of a war to save civilization impossible to sustain.

They were usually young - from 15 to 25 might be their median age - and so influential middle aged newspaper readers at the top of their careers could easily see in them their own children.

Amazing how potent a cheap teddy bear can be 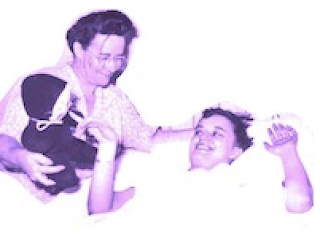 Take the best known case - twenty year old (Adrienne) Marie Barker from Chicago (1924-1943) - with many stories of how her family pleaded in vain to FDR to give her some penicillin ,while photos of the virginal Marie beamed up at a favourite 'stuffie' her mom had brought her.

If you were about fifty years old and an important somebody in some branch of government, military or business it is hard not to insert here images of your own twenty something daughter who also still loves her childhood 'stuffies'.

Through your suddenly watering eyes you read further that her fiance, a Sergeant in the US Army, is about to ship off overseas to possibly meet death.

He's fighting for Christian civilization and FDR is acting like Hitler in regarding his fiance as 'life unworthy of life' - what in the world is going on ?!

(As it happens the only Sgt Elmer Peters I can locate from the Chicago area did die, along with his brother, while fighting in the forests of Belgium-Germany in late 1944.)

All the Allied nations issued specific orders that doctors were not to waste any penicillin on SBEs, condemning them to death - besides Dawson and the people in the NYC area he directly inspired, the only protests against this barbaric command came later, in England.

In the end, the American government blinked and reluctantly allowed a little penicillin to go out for SBE cases.

But Dawson's efforts and images of the dying Marie Barker had moved an even more important couple, a couple who knew of Dawson's claim that if Fleming had gotten off his butt in 1928, hundreds of thousands of people needn't have died from easily curable fatal diseases like meningitis.


That couple, Mr and Mrs John L Smith from Brooklyn, had lost a daughter about Marie's age to meningitis after penicillin had been discovered.

Because the mind of the highly emotionally restricted John L  had long stopped him from addressing Dawson's plea to make lots of penicillin - now ! - so no agonizing rationing decisions need ever arise.

It succeeded in spades and 80% of the penicillin landed on D-Day came from that one plant.

It was sheer raw emotion, from an impossibly small symbol - a newspaper photo of a dying Chicago teenage girl with a teddy bear - that leaped from John L Smith's heart to Pfizer's Marcy Avenue penicillin plant to the D-Day beaches....
blogging @Hope for All Michael Marshall at 12:27:00 PM